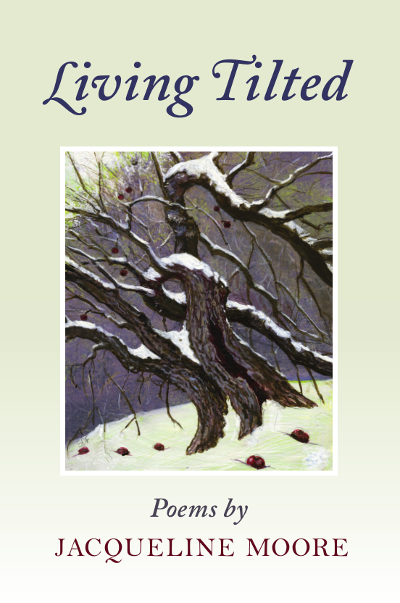 Living Tilted celebrates an old way of life in an ancient house in a Maine forest, now called living off the grid. No electricity, no indoor plumbing, no running water. Time is slow, and chores rule the day. This old way of life is possible only if one is stubborn, and only with the help of neighbors. Then there are the invasions of the modern world: foreign species, the distant sound of traffic, the stumps and slash of clear-cutting next door, the dumping of petrochemicals in a nearby lake. Stars no longer dazzle the eye. The distant horizon glows with electric light. Still there is peace here, the gift of silence, a regeneration of the spirit, a “push into the sky like a year-old sapling,” even the transformation of the world into myth, a transcendence

The poems in Jacqueline Moore’s Living Tilted depict a relationship to the natural world that isn’t quite like anything else. “Too old to be an anarchist,” she says, “I am forced to learn the jazzy/underground way of the world/and follow the worm holes.” Everything made or grown here lives by the rules of time and weather. Houses tilt, trees rot down to stumps. There’s something magnificent in submitting to this process.
—Betsy Sholl, former Poet Laureate of Maine. Her recent collection of poems is Rough Cradle.

Jacqueline Moore spent her childhood in Depression era Greenwich Village, left for Europe during the McCarthy era, lived for twelve years between London and Warsaw, married the Polish philosopher Henryk Skolimowski, returned to the United States, lived in Los Angeles, and then moved to Ann Arbor in the 1970s until the women’s movement intervened. She landed without a husband in Cambridge, Massachusetts, wrote poetry, and studied with Seamus Heaney at Harvard in the 1980s. Throughout her life she returned to Maine like a homing pigeon. She now winters in Portland.