A psychiatric condition today that defines the compulsion of “the traveling sisters” from Maine to explore the world observing and photographing animals. There is no cure. 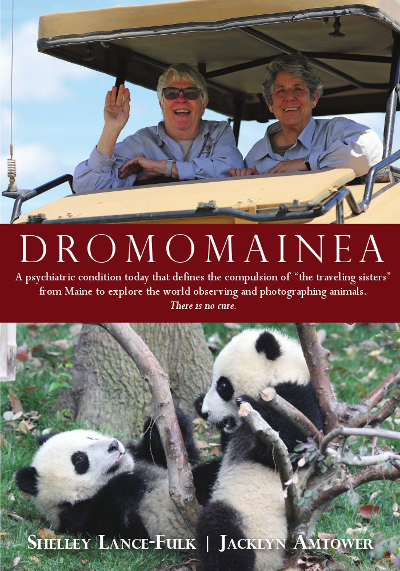 “There were several people walking on the main road, so there seemed to be no concern. We spotted one hippo calmly walking through the gas station and
quickly used our cell phone to capture a brief shot. As we left the main road to traverse the two streets behind, it was totally dark. We heard a grunt-like noise from the side and both froze, knowing the sound meant hippo! We couldn’t see the animal but knew it was close. Our ‘spidey sense’ kicked in, and fear and judgment competed for our next action. Although our first instinct was to run, we were told what to do should one of the animals be close. As one, we stepped to the opposite side of the dark road and waited behind a parked car. The sound of grunting and breathing continued, interspersed with the sound of grass being ripped from the ground. About two minutes later we saw two large dark moving objects heading in our direction. We held our breath….”

Shelly Lance-Fulk & Jacklyn Amtower are sisters living in Beaver Cove, Maine. This small rural community a few miles north of Greenville, is located on the east side of Moosehead Lake in Central Maine. This beautiful community is known for its wildlife, including white-tail deer and moose. They have been traveling and photographing wildlife both in Maine and around the world since their teens. They have visited all seven continents on multiple occasions and their passports have stamps from more than 75 countries. Their experiences of adventure, enlightenment and respect for animals are shared in a number of tales and stories with accompanying photographs taken during their travels. Although the sisters travel four to six months a year and enjoy the experience of meeting new people and observing other cultures and wildlife, the appreciation for the state of Maine always draws them home and to the animals that share the magic and splendor of the region.