in conversation with Jake Morrel 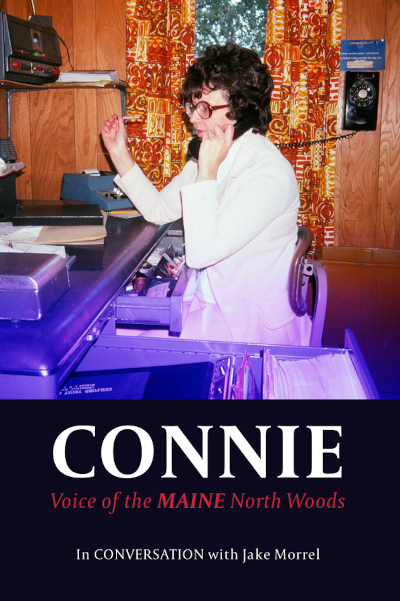 Connie Judkins grew up in the remote settlement of Chesuncook Village, Maine, 20 miles from the nearest road. She and her sister attended the one-room school located a couple miles from their home. Connie left Chesuncook to enter Greenville High School and graduated in 1948. After seven enjoyable years working behind the soda counter at Harris Drug Store, she decided to try something entirely new. Dick Folsom hired her to manage the flying service office. Connie became a woman of many trades. She handled the phones, the two-way radio network, the mail, the payroll, and the reservations, and shopped in town for Dick’s remote customers. Many people in Greenville would stop in to chat with Connie and Dick. Folsom’s was the hub of the town.

Jake Morrel was a high school teacher in 1971 when he first rode in a small airplane. That flight ignited his passion for flying. After hundreds of hours of practice, he was hired by Folsom’s Air Service as a bush pilot. Jake and his wife, Beth, eventually reconstructed an old set of logging camps and founded Hardscrabble Lodge, a fly-in sporting camp. Jake’s first book, Hardscrabble Lodge: True Maine Bush Flying Stories describes that adventure. Later,he published an extended interview with with Dick Folsom, his mentor, Dick Folsom: Bush Pilot—A Legend Reflects. Jake’s most recent book was a conversation with Gary Dumond, a twenty-thousand-hour pilot for the Maine Warden Service, Gary Dumond Remembers—Maine Warden Pilots.