a collection of short stories and tall tales 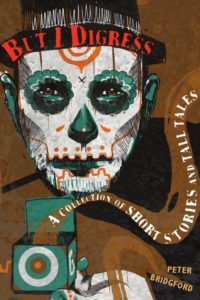 But I Digress is the collection of twenty nonfiction stories that highlight the antics of Peter Bridgford between his middle/ high school, college, and post-college years. Although long forgotten and even slightly repressed, he began sharing these true tales with his students to entertain them during their lunch times, and they eventually became the stuff of legend. They include the last time he went trick-or-treating as a teenager in Buffalo, swimming with friends in a sewer in Ohio, learning to call alligators in Florida, committing mutiny on a longliner on the Grand Banks, getting thrown off of a farting horse, pooping his pants in London, being beaten up by the local paperboy, receiving his first tattoo as a sixteen-year-old, getting and then losing Dizzy Gillespie’s autograph, meeting the last Mohican in Providence, hiking the Appalachian Trail, working on a lobster wharf in Rhode Island, surviving a stint on a processing ship in the Aleutian Islands, and a whole host of other bad decisions that he made during his lifetime that, somehow, he lived through to tell about.

Peter “Bridge” Bridgford lives on an island off the coast of Maine with his wife, Celeste, his daughters, Willow and Bella, and a dog named Twilight. His first book Hauling Through is an international smash sensation.