Growing up in Nazi Germany 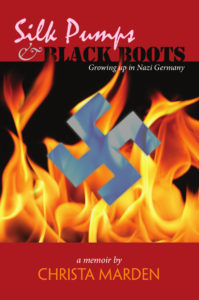 In this Memoir the Author recalls how she met a survivor from the Death March during a Holocaust Remembrance Day in Massachusetts in 1997 who remembered the “little girl with the cheese!” “People said he was old and daffy, but he knew that road and that day and that year. I believed him and just stood there and shivered!”

As the daughter of a German Officer who served in World War I, the author lived through Hitler’s Nazi Regime. She witnessed the Death March from Dachau concentration camp which haunts her to this day. She immigrated to America in 1951. In 1987 she volunteered at the Holocaust Center in Massachusetts and spoke in many schools about her experiences. She also made a tape of her story for the Archives of Yale University.