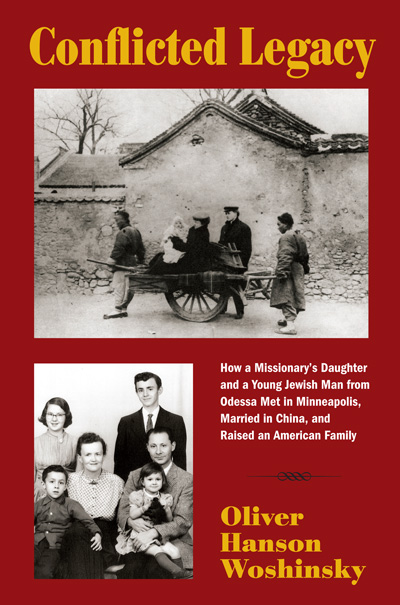 Oliver Woshinsky’s mother, born in China, was the daughter of American Methodist missionaries. This couple, Woshinsky’s grandparents, had moved to China in 1903. Over several decades of instability and violence, they stayed at their mission post in Shantung Province and raised seven children there. Woshinsky’s father, an Orthodox Russian Jew born in Odessa, took a 5,000 mile trip alone at the age of thirteen to escape Stalin and join an uncle in China. Thanks to their China connections, Woshinsky’s parents eventually met and fell in love—surprisingly, in Minneapolis. Both their families were horrified. To make matters worse, they returned to China while the Sino-Japanese War was raging, found work as journalists, got married, and started a family. Not long before Pearl Harbor, they returned to the U.S., where another series of improbable events led the eccentric couple to settle in rural Vermont. Placing his family’s adventures into the historical context of the day, Woshinsky spins a riveting tale showing the dramatically diverse elements that came together by pure accident to produce an American family.

Oliver Woshinsky was born in China, but spent most of his childhood and adolescence in Vermont. The travails and adventures that his parents and grandparents lived through occurred long before his birth or before he could remember. He grew up in peaceful New England communities hearing tales of drama and tragedy in far-off, unstable lands. Eventually, he left home to study at Oberlin College and Columbia University, served three years in the U.S. Army, got a Ph.D. in political science from Yale University, and taught for three decades at the University of Southern Maine. He has lived and lectured in Britain, France, and Russia. His specialty is European and comparative politics, and he is the author or co-author of six books in his field. He and his wife currently reside in Portland, Maine.