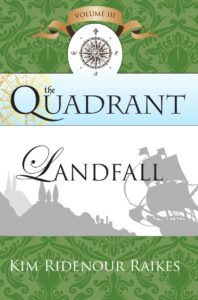 The Quadrant: Landfall is the last in a 3-volume narrative journey set in 19th century New England and on the high seas. In this continuation of Vol. I (At the Mother of Waters) and Vol. II (At the Crossroads of Anjier), Maine native Capt. Ben Melchett and Welsh Romany seaman James Robertson face the crisis of separation on the Pacific. Journeying the routes of each other’s pasts becomes the means by which they discover the path to their common landfall. Survival at sea in an open boat and in the notorious backwater dens of Boston brings the two mariners fully into each other’s worlds, but at a price: though uniting them, their landfall ultimately shatters their communities and kin.