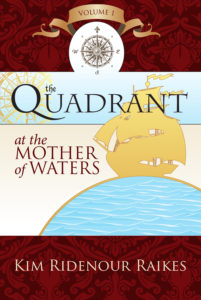 The Quadrant: At the Mother of Waters is the first in a 3-volume narrative journey set in 19th century New England and on the high seas. Against the backdrop of conflicting traditions and beliefs, this shared account traces the unveiling merger of three unlike mariner —a Maine sea captain, a ship’s doctor, and a Welsh gypsy seaman—whose journey ultimately unites their lives and cultures, even as it divides their families and communities.

Taking place over many years, and over a wide range of locales—
from the underground dance halls of Boston’s waterfront to the Romany campsites of North Wales, from the heights of Rio Janeiro to the beach heads of Anjier—this is a hard-fought victory of human wholeness over social convention, conflicting responsibilities, self doubt, and separation at sea.

In its harsh and unyielding historical context—one which holds up a
mirror to societies today—this story poses questions still critical to readers: Can persons of opposing backgrounds conquer the barriers which divide them? Can their transformations in turn transfigure the communities around them?