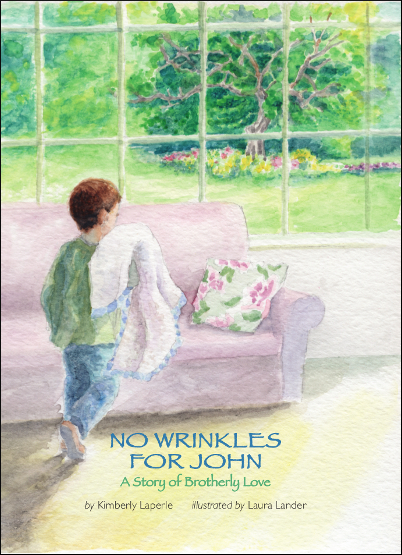 No Wrinkles for John is a story of a lovely little boy who could have felt threatened by sharing his family with another, but instead, welcomed his brother with reverence, even before he was born.

No Wrinkles for John was envisaged in Vermont and swirled around in Kimberly’s mind for twenty-two years. She moved to San Marino, a tiny country in Europe, to write, and research a curiosity inspired by Abe Lincoln, after her youngest child set off for university. For the next two and a half years she lived out of two
suitcases. Unsuccessful in her attempt to find an apartment before leaving Europe, she returned to Vermont and stayed in a hotel until securing an apartment, which, filled with boxes and furniture, flooded ten days later.
With insight attained while standing at the Crouching Lion’s summit, she packed her car and accompanied her youngest of three to Maine, staying at a campground before settling in Bangor. It was there, in the lecture room of an old schoolhouse, where it finally escaped her mind and spilled onto paper.
This is her debut as an author.

In addition to illustrating for other authors, Laura Lander has  written and illustrated five of her own books for children with more  on the way, as well as several memoirs. A transplant from the central U.S., Laura currently resides in Maine and enjoys painting, music, nature and grandchildren.